In this series, we're telling the stories of our earliest users. This week we feature two new stories from our founders Matt and Evan.

Ergonomic Enhancements (by Matt B.)

When I first began my career as a software engineer I had terrible posture while working. I would scrunch my shoulders and bend over my desk, and crane my neck in order to look at my screen. For the past eight years I've steadily increased my awareness of ergonomics. It all began with my Taijutsu practice, where I realized that I would never execute techniques correctly unless I used the correct postures. In many martial arts techniques, power derives from the internal cohesion of the weight of the body, and harnessing that power requires specific conditions like a stacked spine and engaged core. I had heard the concept that a martial artist must "make your warrior walk your everyday walk" and I resolved to improve my posture throughout my daily life in order to further my practice.

It felt difficult to correct my posture at first, like with any new habit. After years I got to the point where scrunching up at my desk felt strange and uncomfortable. Adjusting the height of my screens felt important to me. Then something strange happened. I started to develop wrist pain, which I didn't often experience before I started to improve my posture. What the heck? I realized recently that if I don't scrunch my shoulders then I end up turning my wrists more in order to use a standard keyboard, which caused pain after extended typing sessions.

I had progressed to the stage where I saw the value in split keyboards: they would allow me to keep my shoulders and chest open without forcing my wrists to contort. I felt some resistance over having to relearn typing on an unfamiliar keyboard, though. I'd used the same keyboard for over six years and felt very attached to typing at 120+ words per minute. I felt quite concerned that switching keyboards would cost me productivity at a critical time in my career.

Fortunately because of Newday I had already had a well established framework for deliberate practice in my life, so I decided to bite the bullet and purchase a new keyboard. I bet that if I started with just 10 minutes a day of typing practice I could get back most of my former speed.

Two weeks of using Newday later and I can happily report that I type a bit slower than I used to, but with none of the wrist pain I used to get.

Since we built Newday, flows have helped me bring healthy and productive habits into my life. I stretch in the mornings, meditate, do pull-ups and push ups, and I even used a series of Newday flows to help me learn UI design.

Newday has been great for learning, exercise, and work. This week I wanted to try applying it to my leisure time.

I love working on my garden, but I often find that when I go there, I lose track of time and don’t make progress towards any meaningful goals.

The following formula worked well for me last week when I applied it to UI learning practice sessions, so I thought I could try it out for my gardening hobby time:

(1) Get set up and tidy the work space.
(2) Take a few minutes to decide on a clear in intention for the rest of the time.
(3) Do one main big task or project.
(4) Congratulate yourself!

Creating this flow gave me confidence that I was in control of how much time I would stay in the garden, and that by the end of it, I would have made progress on at least one major project.

It ended up working well, and I have an IKEA shelving unit to show for it. I took 5-10 minutes tidying up and putting things in places where they were supposed to be, then I asked myself “what major project can I do?” I noticed the pile of IKEA furniture parts sitting by the side of the stairs - and realized that building it would be a major accomplishment which would also clean up my garden.

After 20 minutes of work on the shelving unit, it still wasn’t completed, but by starting it I had done the hardest part. By the end of the day I had pieced together something that could otherwise have sat for weeks as a reminder of unrealized intentions.

I credit the question “what’s a major thing that you can make progress on over the next 20 minutes?” with helping activate more meaningful investment of time and effort.

I used Autopilot to craft a killer hackathon project kick-off that set us up for success. 24 hours later, we demo'ed a complete, complex technical project to a group of our friends across the globe. I made this video about the kick-off flows and this video demo'ing our creation. For 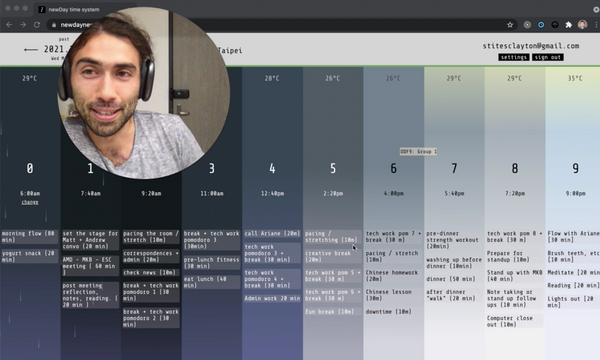 Autopilot is great for morning routines. We know that. But as a founder of the company, I wanted to push my usage of the product to the max. After arriving in Taipei, I was stuck in a hotel room for 14 days, so I decided that before I left quarantine,

I’ve been trapped inside a hotel for the last 14 days here in Taipei. My quarantine finally ends tonight, and I used my time inside to build and launch 3 new features with Matt. Here’s a screen recorded video in which I go over all the new stuff